The Happiness of Fertiliser

Scale Up Trials in Uganda 2012

with prototypes for HH-2

In our scale up trials at the farm of Makerere University near Kampala we found that in a 1.5m3 prototype unit we disposed of the equivalent of 36 weekly toilets in bioliners, 300 MHM (Mentrual Hygiene pads) and 200 Peepoo bags (OXFAM).

All these inputs had disappeared in the first 14 day period when the material is removed for maturation.

This young farmer, hearing about these trials, had walked 5 kilometres to come and see what we were doing. He now runs a tomato plantation of his own, based upon the HH -2 fertiliser making system producing HH -4

Testing for pathogens, in this case, was done at 90 days. No pathogens were found.

“Dogs may bark, but the caravan passes”

The sanitation extravaganza goes on

Other visitors arrived at our scale up trials including the group Slum Dwellers International who have 3 million members. I explained how the composting operation worked and how easy it was to collect biomass from surrounding areas and prepare it for addition as a covering medium for HH -3 toilet system and use in the HH -2 composters. 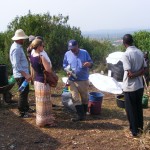 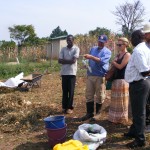 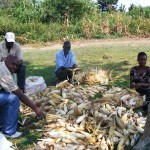 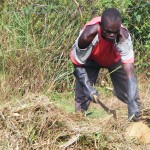 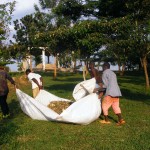 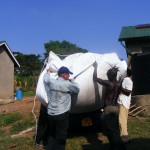 we transported a proportion away to some brand new UDDT toilet blocks that we had been given the use of by the next door church complex. They had lost the keys to the toilets and so they recommended we install our HH -3 toilet system underneath. We then cut off the padlocks and opened the toilets to the public.

Ultimately the best flush medium is the finished HH-4 compost because it is so micro-organically active. It is said that one teaspoon full contains billions of micro-organisms.    This absorbs all odour in the toilet and starts the composting process off right there in the toilet itself. 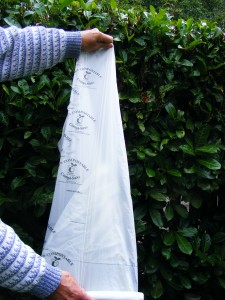 Biodegradeable bioliners made from potato starch are placed in each changeable bucket and when full the bucket is replaced with a new one and then taken to compost. There is no smell or unsightliness at any stage of the operation. 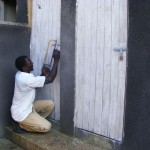 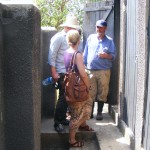 We had provided another bucket of dry flush medium for use in covering the toilet waste. This consisted of chopped grass, corn hulm and leaves etc.,  This is a great start until you have produced the HH -4 compost medium.

We were ready to go.

There were 500 visitors to the church that day

and I made a presentation which was translated into Portuguese. After the the event we were surrounded by interested families who told us they had some major problems with their home pit latrines. 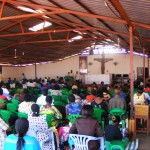 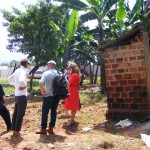 This particular family had a problem with their twin pit latrine and told us that the pits had been dug some years ago and that they were now both filled up. The cost of fuel had gone up and they couldn’t afford to have the tanker come and empty the pits. I recommended that they start again with the HH -3 toilet system and have everything composted as this would be far cheaper for them than any other system. 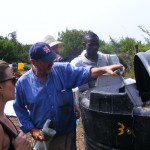 The HH -2 system is solely monitored by temperature and with the simple right proportion of ingredients added into the Hot Boxes the temperature is guaranteed to rise. (thermophilic composting) This temperature increase is accelerated by to the formation and inoculation of Fungi and bacteria which rapidly digest all the obnoxious material.

We had installed timing charts for ease of operation for the staff  back at the farm.

The dates are filled in and the procedure can easily be followed up and monitored by anyone  who has the basic training.

The resultant fertiliser  matures abd is ready for use in 90 days.

However it can be used to grow heat loving plants at the 30 day period when pathogen kill is achieved. 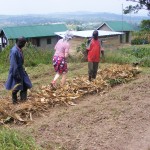 The compost was placed on  raised beds -here in Africa. We then covered the beds with leaves to prevent evaporation. When the seedlings are ready, the leaves are raked back and the seedlings transplanted.

The Slum Dwellers International representative was guided through the compost factory up to the point of zero till agriculture. The Zero Till system offers many benefits to agriculture mainly in that no carbon is lost by digging or ploughing and also none of the valuable moisture is lost.

The representative said she would like to work with us on the Howard-Higgins system. I went on the explain how we had visited several schools in the area and that we found that they burnt problematic toilet encumbrances like MHM (Menstrual Hygiene Management pads) 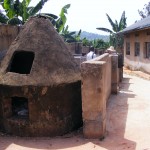 In the Howard-Higgins HH -3 toilet system MHM are not burnt but are placed flat, directly into the toilet for disposal, and covered with the given medium. This process could help eliminate the massive number of school hours lost in Africa because girls don’t go to school when they have their period because of fear of ridicule when bin fulls of MHM are tipped over by the boys to make a spectacle. In The HH -3 toilet system there are no bins hanging around attracting flies until they are emptied and thus the girls can continue with their education un-interrupted. This startling loss of school hours was published earlier on the SuSanA forum of the The Sustainable Sanitation Alliance.  and is continued here. See entry on 17th July 2013

We purchased 300 MHM from the local store and proceeded to un-wrap them for our trial.

They were added into the composting cycle by placing them flat in the buckets containing the bioliners.

When each bioliner was full with the added septic tank effluent etc., we entered them into the current Hot Box , making 6-7 daily layers. Adding up to six bags per layer in this 1.5m3 processor unit. 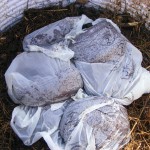 We also added into one of these units 200 PeePoo bags as used by OXFAM at the Haiti Earthquake.  And here in this trial, as in the Haiti pilot project, (See Haiti film II under MEDIA) we found that these bags and their contents had all disappeared in the first 14 day period.

So by simply employing a few buckets, bio liners and a ball of string UDDT toilets can be converted into HH -3 toilets that produce an optimum stabilized fertiliser in 90 days.

It is also stated on the SuSanA forum that the worst job on this earth is having to empty cess pits or dig out the un-composted human waste that accumulates in the housing underneath conventional UDDT toilets.

The head of the church (holding Howard’s book) had taken us into Kampala to meet the ‘Bishop of EcoSan’ who was the ex minister for Water and the Environment. He took us to see his EcoSan toilet he had outside his house. 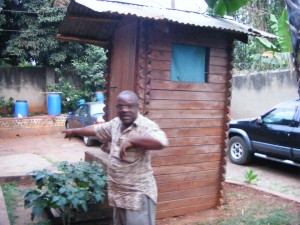 he said “If you made this work in one place in UGANDA it will spread like bush fire!”

Solutions with HH -3 for the elderly the infirmed and children

One of the main problems found with UDDT or twin pit toilets (SuSanA forum) is the type of facility placed above the toilet collection system. So we have the HH -3 toilet designed for this purpose

This type of “conventional” toilet -seating- as found mostly in the western countries solves several problems. They are 1. the avoidance of cross contamination of a UDDT toilet thus:

Children who are uninstructed in the use of UDT toilets can cross contaminate the urine diverter with feaces. This pollutes the whole urine diversion system and means you  will have pathogenic urine collected. This is unacceptable for a subsequent crop growing system

With the use of a separate urinal in conjunction with the HH -3 toilet, 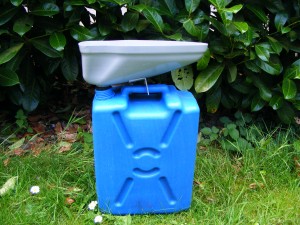 the urine is collected completely separately and there  is virtually no risk of contamination.

Also for the elderly and infirmed the use of squat plates is inconvenient and so the sit down type of HH -3 toilet is preferable.

If the procedure of the Howard-Higgins system is carried by fully trained staff there is no likelihood of any problems ocuring and you will get a wonderfully safe fertile compost/soil conditioner. 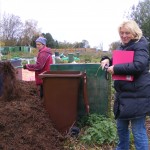 This only needs to be applied once yearly at a rate of 10 tons/acre on regular land. 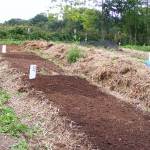 That’s an application of 1 inch thick (25mm) per year.

The end product HH -4  will sustain any crop type with all its slow and fast release requirements and by supplying enough properly synthesized protein, the plants will deter all manner of pests and diseases.

which would you rather have –  see this video that shows how crowding populations too closely together causes much higher risks to the population.

Transporting sludge to agriculture is another alternative to the making of industrial fuels. These options do not address the food and fertiliser problem of developing countries.

The HH-2 method of treating sanitation effluent is simply scaled up and treated on agricultural sites. This will greatly increase food production and reduce the costs. This is an important aspect of fecal sludge management which should be addressed like the groups mentioned in this video, posted January 2015.

The aspect of food production from fecal sludge as not only a soil amendment but as a FERTILISER  as well, with which to grow food for the population, is still not being addressed and its 2015.