Based from our Well End Micro-farm in South Hertfordshire, we offer a range of consultancy options for farmers, growers and Eco-villages.

Write to us with your request for any of the above. We offer on farm training for HH-1 windrow composting and mineral replenishment to protect you animals and crops from disease. Howard previously cured TB in cattle and prevented the spread of Foot and Mouth Disease to his cattle from those that rubbed noses with those that had contracted it.

Write to us with your request for installation of HH-2 Horticultural Systems. The SuperFast composting system that converts dead or nutrient poor soil into rich micro-organically active soil in three months. This system can kick start any type of growing system, and can double and triple your production and reduce crop pests and disease on all soil types to an absolute minimum.

Vegetable growing in your garden for growing pest and disease free crops by growing straight through grass,  without digging up the soil. Grow large and super healthy vegetables right on your doorstep or on roof tops without the use of any chemicals. 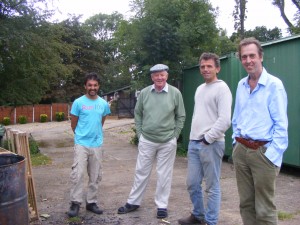 The members of our consultancy also have other web sites.

Richard Higgins, Founder of Bio Farming Consultancy was raised on a Somerset farm in the UK. He attained his NDA,  at the Royal Berkshire College of Agriculture. Later he completed a ten year postgraduate study of the works of Sir Albert Howard while travelling and teaching from China to Hawaii. Sir Albert is now considered the Grandfather of organic farming and his research was from Permanent Agriculture of the east, which is where the term Permaculture was derived. Richard has become a world leading exponent of his work. He presented the Howard (memorial) lecture 2009 at the University of Coventry, for Nigeria to ‘Go Organic’ (transcript sent to HRH The Prince of Wales, who made an immediate response). HaIti Film II was also sent to HRH The Prince of Wales. Richard spent three months at the Haiti earthquake disaster being the lead consultant for the NGO ‘New Directions Foundation’ where he quickly established the Howard-Higgins Thermophilic composting system HH-2, which can also render human waste into safe and potent fertiliser in 30-90 days and avoids the standard practice of moving it from one hole in the ground to another or sitting anywhere for long periods of time. The waste is essentially pathogen free in 14 days and the testing for pathogens is done at 30 days. He is the consultant to various groups and runs a Centre of Excellence and teaching centre in South Hertfordshire, in the green belt of north London. Well End Permaculture International also runs introductory courses that can be followed on by full Permaculture Design Courses (PDC).  Also other courses are offered such as clay oven building, polytunnel building, cob and straw bale building and fast turn around food production with SuperFast composting. These courses are intended for researchers for Aid organisations, aid workers, students of sustainability, budding Permaculturists or anyone who wants to grow their own healthy food in an easy and highly productive sustainable way.

What is healthy food

Howard’s work detailed that really healthy soil produces really healthy plants. Healthy plants are those that are not attacked by pests or disease without using any kind of insecticides organic or otherwise. This is the true measure of the health of plants (Howard).

The effects of eating healthily grown food are cumulative and so generation by generation the health of the population will increase. The reverse is also seen to be true.

The cause of disease

Howard states in his lifetime’s work, which included 30 years research and development in India, that if animals are fed crops that are imported to the farm and may have been grown on non humus rich soils, or inferior soils, they will not be imbibing the nutrition that soil will provide that has had the greatest care taken to replenish and sustain it. The same goes for humans. Therefore it is imperative for farmers today to start smaller closed loop farming, otherwise known as mixed farming. All crops grown on humus rich soils will imbibe good health upon their consumers. To find full reference to this and the history of Howard’s success in many countries of the world we hold the title Farming and Gardening for Health or Disease is temporarily unavailable, price £10.00 Please purchase through PayPal or email: info@suaglon.co.uk.

Modern high tech farms that are chemical dependant can also take advantage of Howard’s principles of fertility making, although it may seem a long time ago that Howard carried out his work, we at Sustainable Agriculture London are doing the same work today and remarkably we are finding that with very little man hours we are achieving the same results that Howard did. Therefore the system is viable and relevant today. The scaling up of the fertility making process is easily possible with the machinery already found on the modern farm, but with the addition of the mixed farming approach. This supports the case for a smaller sustainable and more robust closed loop farming systems than we generally see today. Large chemically dependant systems with their proudly reduced manpower to manless gantries and more efficient sprayers on bigger fields results in a more fragile farming system which plunders their resources and bring in inputs from other farms. This cannot be called sustainable or in any way conservation farming.  Without Nature’s bank of indigenous weeds for fertiliser making and species diversity farming is becoming impoverished and dependant on the ever increasing mining solutions and more and more expensive scientific research.

“If we don’t change the way we’re doing things – we’re going to get on getting the same results.” And today it’s loss of species and indigenous flora that is on everybody’s lips. Without the required pollinators 25% of certain crops can be lost. This is a disaster in farming economics. So here it is clear that the link between soil health and the maintenance of species diversity is relevant to profit.

When you reduce some of your land area from yield, approx. 15%, and divert it to bio mass production and introduce some mixed farming you will be able to maintain a sustainable system that will not, under normal circumstances, suffer the catastrophic crop failures we have seen in recent years due to drought in the UK. You will also greatly reduce your fuel bill and be able to slash your chemical inputs to nil.

In the long term, and that is what is required of farming, we need sustainability not just profitability.  We have to see further than the quick fix in crop production to satisfy the bank manager.

Real farming means sustainable farming – a farming that preserves the source of life and the species and plant varieties that we all depend on for our food.